In 2012, the McKnight Brain Research Foundation endowed the University of Florida with $300,000 to establish a permanent annual lectureship as a memorial tribute to the late William G. “Bill” Luttge, Ph.D., the first director of UF’s Evelyn F. and William L. McKnight Brain Institute (MBI). To be held each year, the William G. Luttge Lectureship in Neuroscience will explore inventive ideas and approaches to ensure healthy cognitive aging and to counter brain diseases.

Luttge spearheaded efforts to organize the vast amount of brain research conducted at the University of Florida into a comprehensive program, eventually resulting in the establishment of the $60 million Brain Institute on the UF Health Science Center campus in Gainesville that was dedicated in 1998. He passed away March 24, 2012, after being diagnosed with multiple myeloma.

The Luttge Award is an open competition, honoring the graduate student of the year. This year, the William G. Luttge Award for Outstanding Graduate Research in Neuroscience competition was held on April 2 at 2pm via zoom. Faculty and staff were invited.

The William G. Luttge Award for Outstanding Graduate Research in Neuroscience was established on funds donated by Dr. Sati Kalra, Distinguished Emeritus Professor of Neuroscience, in the honor of Dr. Luttge, the Founding Executive Director of the McKnight Brain Institute.  This distinction is awarded annually to Neuroscience PhD students who participate in a 15-minute oral competition.  The top three students received monetary awards.  The winner is engraved on a plate for the plaque that adorns the office suite and he/she goes on to represent the Neuroscience concentration at the College of Medicine Medical Guild Competition. 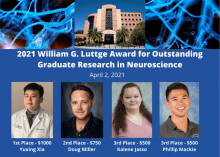 Congratulations to our students to the left on being selected as winners of the 8th annual William G. Luttge Award for Outstanding Graduate Research in Neuroscience.